A Snowman Greetings from the 154th Harford Fair in PA!

A few good snowmen were showing up
at the Harford Fair in Harford, PA.
First there was the friendly cow #228 - named Snowman! 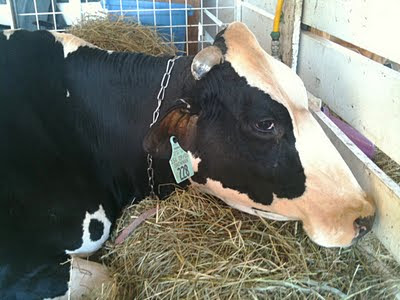 Then there were these great paintings in the art barn done
by some very creative kindergartners. 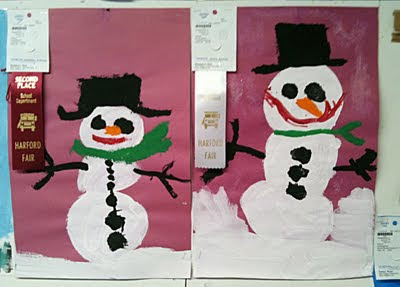 If you happen to be in the Scranton area, it's worth the visit
to the fair. In addition to finding some interesting snowmen
throughout the day - they have many types of food that are fried -
things you wouldn't even probably think of frying yourself...
but now you can have the chance to try them out at the fair. 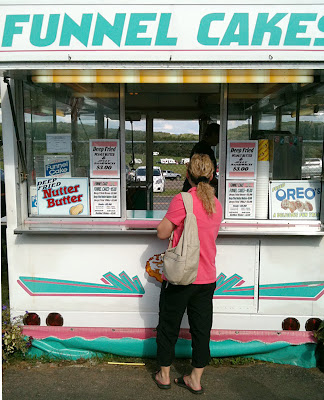 You can read more about the Harford Fair here

A Snowman in Outer Space

At the time is was 251 million kilometers from Earth. This asteroid, Vesta,
is the most geologically diverse asteroid. Hubble telescopes have revealed
evidence that the asteroid once had lava flowing on it.

NASA's Dawn spacecraft entered orbit around Vesta in July and has since
been studying the asteroid. The spacecraft began orbiting Vesta on July 15
and will continue to do so for a year. After, Dawn will then do some asteroid
hopping where it will encounter Ceres.

Vesta is the brightest asteroid in our solar system and measures around 330
miles across (approximately the length of Arizona).

Like most asteroids, Vesta lives between the belt of Mars and Jupiter.

Vesta is similar to the Earth's moon, with lava beds  and debris.
There is a flattened area on one end of Vesta, which was created by a
giant collision billions of years ago.

"Vesta and the recently categorized dwarf planet Ceres have been selected
because, while both speak to conditions and processes early in the formation
of the solar system, they developed into two different kinds of bodies.
Vesta is a dry, differentiated object with a surface that shows signs of resurfacing.
It resembles the rocky bodies of the inner solar system, including Earth."

Ceres, by contrast, has a primitive surface containing water-bearing minerals,
and may possess a weak atmosphere. It appears to have many similarities to the
large icy moons of the outer solar system.

"Ceres and Vesta are the two most massive residents of the asteroid belt.
Vesta is a rocky body, while Ceres is believed to contain large quantities of ice."


As you can see - a "snowman" seems to be taking shape on Vesta -
a perfect cooling image in this summer heat. 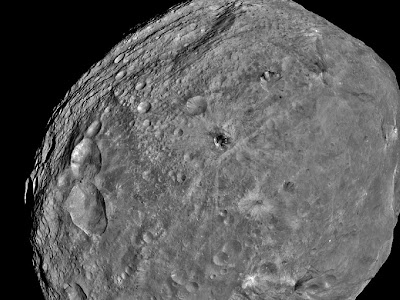 NASA's Dawn spacecraft obtained this image of the giant asteroid Vesta with its
framing camera on July 24, 2011.
Source: NASA 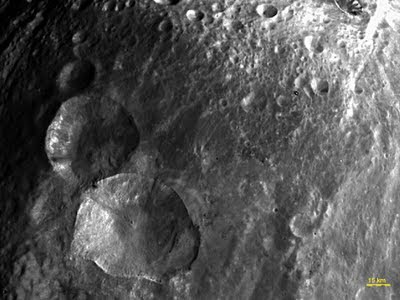 In this image, obtained by the framing camera on NASA's Dawn spacecraft,
a set of three craters, informally nicknamed "Snowman" by the camera's team members,
is located in the northern hemisphere of Vesta.

You can read more about this story here

Posted by Snowman Expert at 7:27 PM