Build a Snowman and Help Prevent Flooding...or maybe not....

The BBC News reported that an Environment Agency spokesman suggested snowmen would help prevent the potential risk of flooding by slowing down thawing.


According to Dr. Sim Reaney, a lecturer in physical geography at the University of Durham,

"On a very practical level, it does actually make some sense....
The more you pile up snow, the longer it takes to melt... I can see how it
would work. Rain on snow is a big cause of flood events. Any snow that
is compacted takes longer to thaw, whether it be on a road or as a snowman."

Weather forecaster Jim Bacon of WeatherQuest, based at the
University of East Anglia (UEA) in Norwich also says,

"Snow is melting all the time from the warmth of the ground underneath it,
and the warmth of the air moving over it... if you roll it up into a ball,
you're decreasing the surface area and that would slow down the rate of melting."

However, the flaw in the theory, he said, was the time lag between the
snow melting and the water reaching rivers.

"A lot of the time when you get flooding, it's due to the slow accumulation
of water.
It takes a while for water to filter through the ground and into the rivers.
It might well be that the rate of melt from snowmen coincides with the
water going into the rivers over a longer time frame so it wouldn't help."
Professor Kevin Hiscock, an expert in hydrology at UEA, gave an example:

"You'd need, say, 107 square feet of snow to make a snowman.
The catchment area of the River Wensum in Norfolk is 231 sqare miles,
so that's the equivalent of 60 million snowmen."

However, the following day the story was revised... as reported
in the Guardian on-line

The Environment Agency has amended its advice on the best way to deal
with the looming thaw after conceding that urging everyone to build a
snowman would probably do little to lessen the risk of flooding.

Amid fears that the recent snow will melt into floodwater as temperatures pick up over the weekend, the agency had offered worried homeowners an
unorthodox suggestion.

"Ideally, if everybody built themselves a snowman that will slow the thaw
down a bit," said Roy Stokes, a spokesman for the agency.

He pointed out that tightly-packed blocks of snow – such as snowmen –
tend to stay colder for longer, thus helping to regulate the flow of water.

Although Stokes's exhortation may have delighted legions of children
(and more than a few grownups), it was sadly overruled, with an EA
spokeswoman later admitting that a nationwide phalanx of Frosties
would do little to stem the flood waters.

"When snow is compacted, as it is when you build a snowman or drive
over it in a car park for example, it melts at a slower rate," she said.

"But while building snowmen is great fun, sadly it is unlikely to make a
significant difference to the overall rate at which the snow melts across
the country and won't protect your home from flooding."

Today's Snowman has a History of the Snowman Pinterest Board - come take a look at what were are pinning.
Posted by Snowman Expert at 7:09 PM

Wow - it's a Snowman Slide!

What a great dad who spent 80 hours to create this wonderful slide for his kids in Lake Tahoe.


You can see more at the video here at YouTube

Today's Snowman has a History of the Snowman Pinterest Board - come take a look at what were are pinning.
Posted by Snowman Expert at 6:09 PM

Thrash Lab took a trip to Tahoe and created this great video "10 Epic Ways To Destroy A Snowman.”

All photos are from thrashlab.com 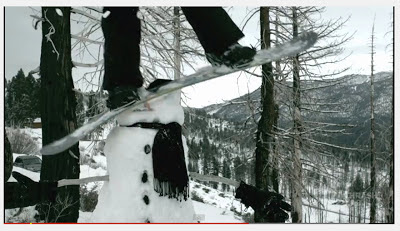 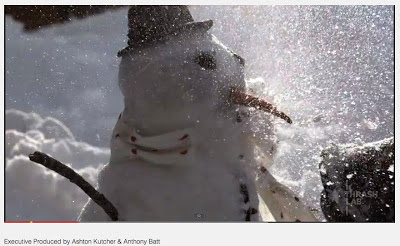 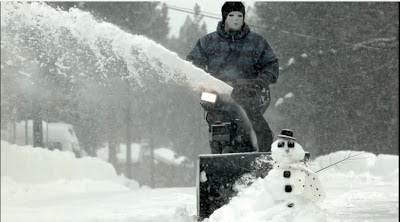 Shot in slow-motion on the Phantom Miro M320S High-Speed Digital Camera, it is truly a winter wonderland among the exploding snowballs.

You can see the complete video at the Thrash Lab website.

Today's Snowman has a History of the Snowman Pinterest Board - come take a look at what were are pinning.
Posted by Snowman Expert at 6:07 PM

Snowmen in the Middle East

Thanks to an unusual snow fall in the Middle East this month... there have been quite a few snowmen sightings in that part of the world.

Even President Simon Peres was out enjoying the snow!

More snowmen in #Jerusalem. In this case, a snow family. #middleeastsnow
http://twitpic.com/bu3jo0 photo by Derek Stoffel

For more about these Middle Eastern snowmen, see the CBC News Blog

In other Snowman News - Today's Snowman has a History of the Snowman Pinterest Board - come take a look at what were are pinning.
Posted by Snowman Expert at 7:44 PM