Snowman on Broadway (kind of) 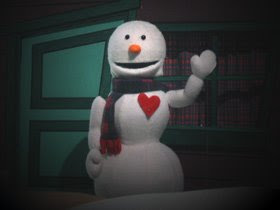 ATLANTA, GA – There's no business like snow business. Playing now in the Center for Puppetry Art’s Downstairs Theater; Sam the Lovesick Snowman, the classic story of snowboy meets stove, snowboy falls in love with stove, stove kills him "...well, thankfully not!" (I'm told)
Actually, it's based on The Snow Man, by Hans Christian Andersen and it's hilarious, heartwarming and perfect for kids (I actually out Andersen in my book). 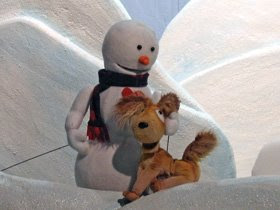 Tickets for patrons ages 2 and older are $14.82 + tax for the general public (the ticket price includes a performance, the Create-A-Puppet Workshop, and admission into the permanent Museum exhibit Puppets: The Power of Wonder and special exhibits including the brand new Jim Henson: Wonders from His Workshop). Order your tickets “FEE-FREE” online at www.puppet.org or call the Ticket Sales Office at 404.873.3391. The Ticket Sales Office is open Monday through Saturday from 9am – 5pm and Sunday 11am – 5pm, with extended hours during evening performances. The Center is located in Midtown Atlanta, across the bridge from Atlantic Station, is accessible from MARTA, and has limited free parking.

Posted by Snowman Expert at 8:13 PM