Just because it's the summer doesn't mean there
are not any snowmen around.... 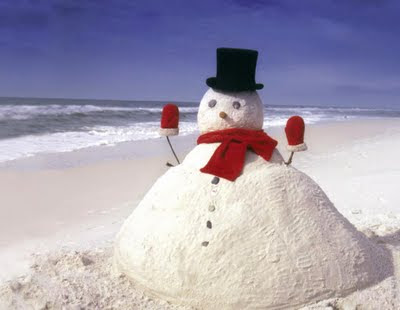 We figured it would be a slow news day since lately it feels like the middle of
summer, but low and behold - there seems to be snowmen half way around
the world in Auckland, New Zealand:

In what is described as a once in a lifetime event, a migration of snowmen is
making its way to Auckland. A sighting has been reported in Bairds Road in
Otahuhu and additional snowmen have been tracked to central Auckland.

Snowmen are seldom seen in Auckland, which rarely sees temperatures below
zero degrees Celsius, and have traditionally appeared in the North Island’s
Central Plateau and parts of the South Island.

This is an unusual migratory path for the predominantly alpine-bound characters,
and its rare to see them in an urban habitat in New Zealand, says Honor Dillon,
Export 33 brand manager and part-time snowman enthusiast.

Honor continues: Snowmen are docile, friendly and will melt your heart...
that is before they themselves melt and disappear into Auckland footpaths.

As it turns out, all the snowy news isn't just based in New Zealand, in today's NY Times,
it was reported that 15 feet of snow has fallen in Utah.

We have to believe that somewhere on those mountains, one of those short- sporting
skier's will be making a snowman (and if they do - we would love to see a photo of it!).

Of course, if any of our reader's see or create any summer snowmen, we would love
to be able to post them to this blog and share them with our snowmen community.