It's A Parade of Snowmen at the US Patent Office

Who knew you could find a bunch of snowmen
in the US Patent Office...but there they are!
ABSTRACT US Patent # 8011991
for the Apparatus for facilitating the construction of a snow man/woman:
A building component for facilitating a construction of a snow man/woman.
A spherically-shaped body is provided that has an outer surface and an interior,
the interior substantially lighter than when the interior is filled with snow.
An adhesion surface is provided on the outer surface of the spherically-shaped
body that substantially increases the ability of the outer surface to adhere
snow to the spherically-shaped body.
The spherically-shaped body and adhesion surface form a building component
for facilitating the construction of the snow man/woman. The adhesion surface
may be an electrically charged surface in combination with a texture or alone.
The electric charge may be generated by a generator that may be disposed
with the body. 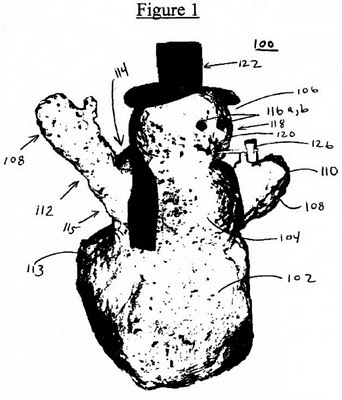 [and that's just the beginning -
who thought something built
out of snow with 3 balls would
be so complicated!] 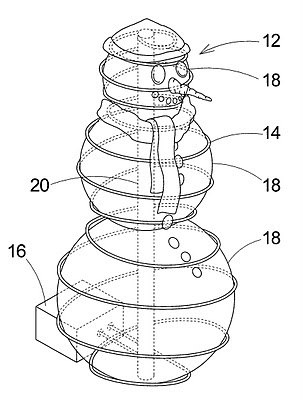 [really? by freezing the moisture in the air to the conduit to provide
the form assembly with the appearance of being made of snow.]

Now this US Patent #5632926 addresses the problem of those physical
injuries that happen while making a snowman out in the snow - this
Snowman Mold should solve all those problems as described:
BACKGROUND OF THE INVENTION
Typically, snowmen constructed subsequent to snow is a procedure effected
by the rolling of various balls of snow which are subsequently positioned
in a vertically aligned relationship. The instant invention eliminates need to
lift such balls of snow which may result in various physical injury to individuals
and to this end, the instant invention substantially fulfills this need.

SUMMARY OF THE INVENTION
The snowman mold of the invention includes a plurality of sections that
are integral relative to one another, but each including relative door
structure to permit the removal of the mold structure or alternatively
maintain the mold structure in place.

[I can tell already this is just the tip of the snowmen at the
Patent Office and we'll be back once we spend some more time
in the patent archives.]

As always - if you have any snowman we would love to see them
(in any season) Just send them our way!

Posted by Snowman Expert at 8:44 PM