Although there may be no snow on the ground for the Stockade "Celebration of the Snowman - A Celebration of the 1690 Massacre", Schenectady is still celebrating with many snowmen in the area at Riverside Park, from 4:00-6pm. 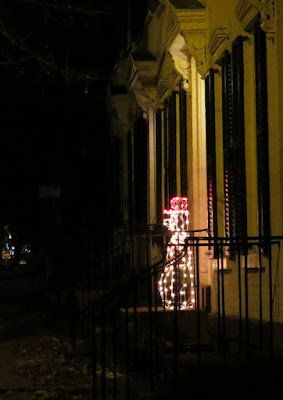 The story of how the Snowman became the guardians at the fort's gate, which became known as the Schenectady Massacre of 1690, is told here by Samuel Maurice, from this month's "The Stockade Spy" Newsletter:

The eighth of this February marks the 326th anniversary of the Schenectady Massacre, a dark day in Schenectady's History to be remembered for the total destruction of the area's first settlement carried out by a troop of over 100 Frenchmen accompanied by 96 Algonquin Indians. Two French military officers, De Montet and Monsieur de Saint Helene lead the skirmish in retaliation against Dutch and English settlers for the Lachine Massacre in Quebec,Can­ada, occurring earlier that year.

The massacre comprises one of many battles and skir­mishes that took place within the first colonies and Canada, known by historians as the Beaver Wars, a precur­sor to the French and Indian War. Many legends and wives tales surround the massacre... Some, such as the ride of Simon Schermerhorn, possess more historical validity while others, like the tale of the Old Squaw or the Snowman Sentinels that failed to protect the village, remain subject to skepticism and speculation.

As the tall tale dictates, Fort Orange, a predominantly English settlement at the time, warned Dutch neigh­bors, Schenectady, of the impending threat of French attack and offered their settlement troops to keep guard while the residents slept. The prideful Dutchmen of Schenectady thumbed their noses at their English counterparts and built snowmen sentinels at their gates in a mocking demonstration of their attitudes toward the English and their officious ways. Ironically enough, the massacre would have never taken place if the French invaders did not come upon a wide open gate guarded by two snowmen holding sticks as muskets.

It seems that the Stockade Association attributes the story of the sentinel snowmen, as a "tall tale." We heard from David Giacalone who told us:

"It's Bob's [Eckstein] version of the event from History of the Snowman that I believe is far more accurate. The assigned sentinels might not have built the snowmen thinking they would fool the French and Indians, but they definitely did abandon their posts, and there were very likely to be snowmen near the entry gates, given the number of children living in the Stockade in need of winter entertainment."

David's website, Snowmen at the Gates, will discuss local Schenectady issues, uses the "Attack of Schenectady" image from the North Wind Picture Archives as it's masthead. David recently sent us this information regarding the New Mission Statement for the site: 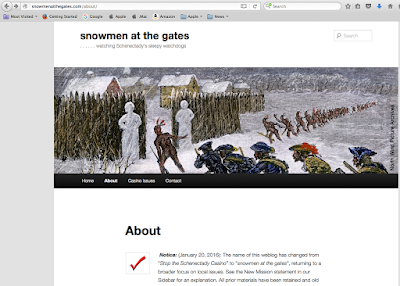 With the Rivers Casino at Mohawk Harbor now a certainty for Schenectady, it's time for this weblog to again broaden its focus. We will still be "working to protect our community from casino-made problems," but we will also be monitoring City and County government in general, along with self-proclaimed public interest or action groups, to see whether our public and private "watchdogs" are in fact protecting our community or instead shirking their duties.

Our name "SNOWMEN AT THE GATES" refers to the legendary snowmen left to guard the open stockade gate of the little village of Schenectady on February 8, 1690, while the appointed sentries had a tankard at the tavern. That dereliction of duty allowed a group of French and Indian warriors to enter the stockade, burn down the village, and massacre or kidnap its residents.

Thank you David for all the Schenectady information. You can read more about the Snowman Festival and Stockade Association at their website, historicstockade.com, and if anyone is in the area - please stop on by for some snowmen activities!

Posted by Snowman Expert at 6:24 PM