Today's Snowman has been contacted regarding the breaking story of Bostonians upset over using the snowman in bonfires. A Tom Giarrosso has explained; "There's a bit more to this story - WCVB-TV and The Gloucester Times missed the mark in the fact Frosty was consumed in 2004 - and made an appearance in 2007 - but was 'rescued' by the fire department in a scripted segment before the bonfire was started."

Today's Snowman got to the bottom of all of this; Yes, Tim and Tom are brothers. It's Richard and not Rickard York unless you are in Lichtenstein. Yes, this story gets more frustrating.

Tom Giarrosso continues; "Some oversensitive residents decided they didn't like the presentation, and have created the controversy. While it's been good for T-shirt sales (Giarrosso and York donate all revenue to the Fire Association) it has caused enough of a stink that the Fire Association relieved them of volunteer duties on this year's presentation, for the first time since 2000...The Fire Association is just trying to appease everyone and make it less controversial...but the controversy is a few residents upset because they have to explain that an inflatable snowman isn't a living thing to their children." 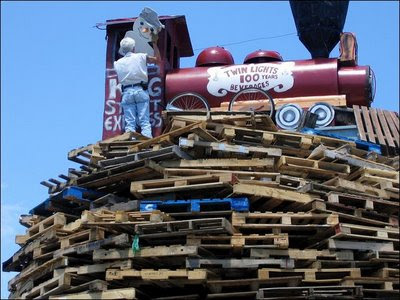 Tim Giarrosso is a restaurant owner and local artist (and we all know how weird and creative those artist types can be) and little is known of this mystery man of two names, Rickard York/Richard York. Many would think Today's Snowman would be upset hearing of the snowman bonfires. Nothing could be further from the truth. We believe that as long as no one (meaning real humans) are getting hurt that this is all in good fun and even a good safety announcement teaching children first-hand the horrors of getting burned alive. We say put two or three snowmen on top. The more the merrier. Burning snowmen has a wonderful world tradition (more than be learned here) and anything that calls attention to the snowman is good by our books. We think it's ridiculous that anyone would have mistaken a plywood snowman as real and want to thank Tim Giarrosso and Richard York for their previous efforts to raise money for firefighters. We guess this is the thanks they get for trying to entertain their neighbors and have some fun during the difficult non-snow months of summer. We officially filed a plea of the authorities that be of the great city of Boston to reinstate both these fine gentlemen. It's our hopes that both of them will once again be putting snowmen on top of highly flammable piles of wood sometime soon!
Posted by Snowman Expert at 10:18 AM