Finally, the entries for the first snowman contest in 2009. It's time to vote! Get your friends, call the family, wake-up the dog, nudge grandma, log-in to Facebook, sign-up for MySpace. It's here–Election 2009! It's free! It's fun! There's prizes! 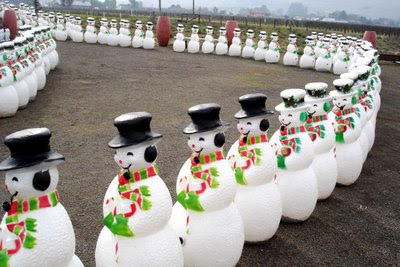 1) "March of the Snow People" Yes, that's Napa, California and this first entry is from two great artists, Dana and Ingrid. A vote for them is a vote...for them. 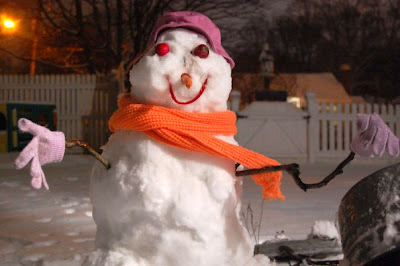 2) "Lisa Love" by Sweets, a sweet girl from Long Island who is a newcomer in snowman-making competition but is expecting to make a big impression with her first very strong entry here. Good luck, Sweets! 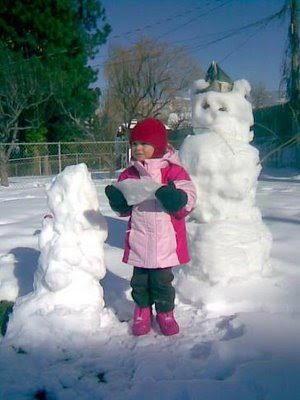 4) "The Perry Family Snowmen" from Somyr Perry of San Diego is also from Open Salon. She went to the Rocky Mountains of the Salt Lake Valley to shot these snowmen "built by toddler and husband, and accessorized with rock eyes, radish noses, stick arms and newspaper hats, by me. May they stand tall in my parent's backyard all winter as a reminder of our most awesome Christmas...thanks for the inspiration, Mr. Eckstein." It sounds like they are taking this competition quite seriously. Throw them some support! 5) "Christmas Present" was sculptor's Patty Carmody Smith's beautiful Christmas gift for her husband. "The experience was fun and really got me thinking about the symbolism of the snowman. For me I see a lot of the archetypal father figure." 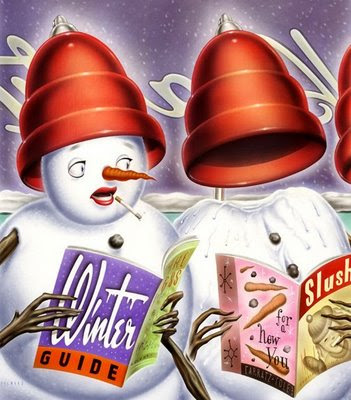 6) "Picasso Snowmen (or Snowmen At the Hair-Dressers)" by artist Dan Picasso. Wow. I love Devo! (and check out his cool website!) 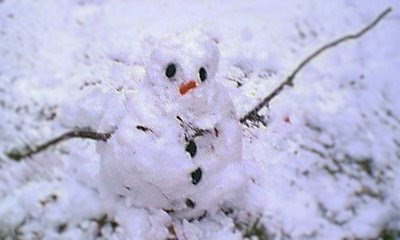 7) "Alabama Snowman" Okay, I'll admit there's not much here but this was made in A-L-A-B-A-M-A and wait until you hear this heart-breaking story from Pat who sent in this entry; "This snowman was created out of very little (not much snow generally falls in central Alabama) but these 2 kids went about getting all they could gather up and made this little guy. He later appeared on the town's calendar for December...They made the snowman under the branches of several large pecan trees, and used pecans for eyes and buttons, and twigs for arms; his nose is a standard peeled baby carrot. It was their first snowman ever, and probably their last until they have kids of their own to build one with." I don't know about you but I'm crying my eyes out here. 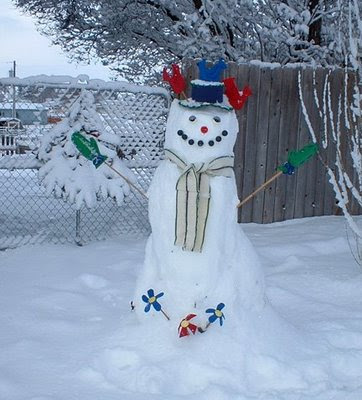 8) "Steve & Kris' Snowman" This final entry is from eastern Oregon and these people mean business. Kris explains their snowman is going for that pushcart peddler look. I think they nailed it! Good luck!

The voting poll is in the top of the column on the right under "Snowman Contest" in the middle of the blog....just click on your favorite snowman. One vote per computer. A signed copy of The History of the Snowman, snowman posters, mugs are among the possible prizes.
Posted by Snowman Expert at 9:29 PM