Zeeland, Michigan takes 2nd Place in Snowman Making
Champion of the Free World Contest
As reported by Gary Brower on the HollandSentinel.com 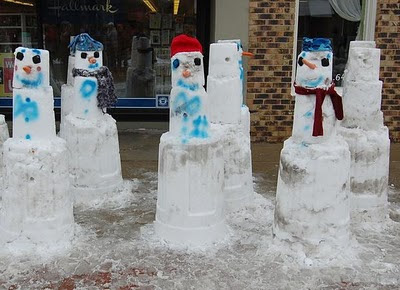 Zeeland’s new Wintervention festival was a friendly competition against
the cities of St. Clair, Saline and Sault Ste. Marie to see who could
build the most snowmen in two hours.

It was quantity over quality as 50 people at a time packed snow into buckets
and garbage cans along Main Street, “smooshed” it with mallets and flipped
them on top of each other with hopes the snow would hold together.

Snowmen had to be at least 4 feet tall. Decorations didn’t matter, according to rules.

The cities used teams of up to 50 people to build as many snowmen as possible
during a two-hour window. Zeeland hosted its portion of the event from
11 a.m. to 1 p.m. on Main Avenue with the city street department trucking in snow
into the shopping district for the competition.

This story was also reported by Ron Cammel of The Grand Rapids Press on mlive.com
Posted by Snowman Expert at 2:00 PM