CHAMPION, NY - an upstate New York man and
his family and friends made the best of the snow during
the current storms and built a snowman - towering at 35'.
Well that is a creative way to use your summer inflatable pool
during the winter months! 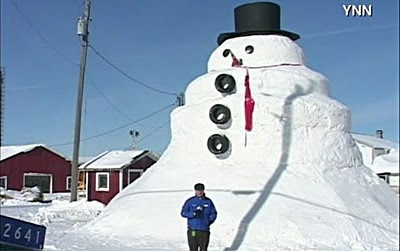 [photo Copyright 2011 CNN]
Vernon Scoville, one of the builders, said they were inspired by similar snowmen
on the internet. "Somebody said something about how they saw one on
the internet so high, 15' or something. I said, 'we can do better than that,"
Scoville said.

The group has been building giant snowmen for a few years now,
but the 35' tall behemoth this year is their largest, which they named B.A.

Scoville said it was a team effort with lots of heavy lifting involved:
"20 of us working and we had trucks going back and forth with dump trailers
bringing snow to us. We had a guy pushing it up to another guy that's snow
blowing it out to the elevator. There were probably eight people up on the
snowman shoveling around it and packing it..."

B.A. has racing tires for buttons, oil barrel lids for eyes, a road cone for a nose
and a swimming pool for a top hat.

Dozens of people have stopped by the snowman for a picture or two and it has
become somewhat of a tourist spot. Scoville said he was surprised by the
number of visitors the snowman had received.

Scoville said about 50 people in all helped build the snowman this year.
He expressed his gratitude for their help and said he never could have done it alone.

You can view the video at the local ABC news video link here.

Posted by Snowman Expert at 5:06 PM