Snowmen burn in Europe...and women add fuel to the fire for the first time in history.

It's a "Böögg " kind of day in Zurich for the start of Spring...
Zurich’s spring festival, the Sechseläuten, has long been the preserve
of the city’s all-male guilds. This year, for the first time ever,
women have been invited.
[first reported by by Isobel Leybold-Johnson, swissinfo.ch] 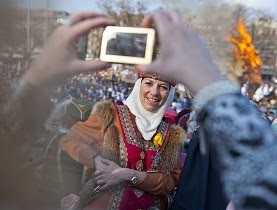 Welcome to the Sechseläuten festival...
Where the women and snowmen were separated.
Snowman Burning Day is a festival to mark the end of winter and
welcome spring. It's a way to celebrate the change of the seasons.

The Sechseläuten festival in its current form dates back to 1867.
It derives its name from the fact that at the spring equinox the bells
of Zurich's main cathedral would toll vespers again at six o'clock to
announce the end of the working day. In winter time the working
day lasted only until five o'clock due to early dusk.

The Fraumünster Association has been fighting for 22 years to be
able to process alongside the men. But the battle is not over yet.

A premiere is the fact that women will be allowed to take part in
the procession alongside the 26 male guilds – albeit as guests.
The Fraumünster Association will march in second position
behind the Weggen guild.

“The Fraumünster Association has existed for 22 years and for
ten years we have had official permission to march before the
main procession...We are really happy that we can now be
integrated into the main procession and be part of the Zurich
cultural landscape.” the association’s president Regula Zweifel
told swissinfo.ch.

The invitation, however, is only extended to 2011 and does not
necessarily foresee the association – which not officially a guild –
becoming a Sechseläuten fixture.

Why the guilds, once powerful associations but now more like clubs, have
been so against women taking part still remains partly a mystery to Zweifel.

“I think the guilds have their own rituals which don’t really fit in with
women’s way of living and it could be that they simply want to keep
themselves to themselves,” she said.

So what's behind all these exploding Swiss snowmen?
One of the Fraumünster Association main events is its annual medieval
market showcasing arts and crafts of the times. 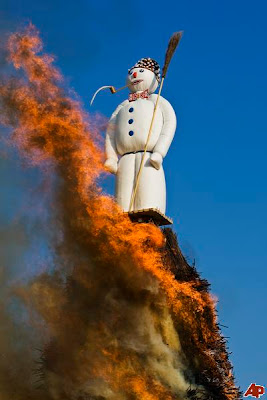 Monday’s festival takes the form of a colourful parade through
the city to the Sechseläuten square. It is here that the Böögg –
a snowman figure representing winter whose head is stuffed with
explosives – will be set on fire in the evening. According to tradition,
the shorter it takes for the Böögg to explode, the better the summer.

This climax of the holiday of burning of Winter in effigy, in the form of
the Böögg, a figure of a snowman prepared with explosives is based on
the custom of burning a rag doll called Böögg predates the Sechseläuten.
A Böögg (cognate to bogey) was originally a masked character doing
mischief and frightening children during the carnival season.

This holiday is celebrated by the Swiss as well as the Americans.
In some cultures, they use the burning patterns to determine the
type of summer they will have. Zurich has rung in the spring with
its traditional Sechseläuten (six bells) festivities, culminating with
the symbolic burning of the Böögg snowman.

Snowman as a Weather oracle
Popular tradition has it that the time between the lighting of the pyre
and the explosion of the Böögg`s head is indicative of the coming
summer: a quick explosion promises a warm, sunny summer,
a drawn-out burning a cold and rainy one. The shortest time on
record is 5:07 minutes in 1974, and the longest in 2001 with 26:23.
wikipedia

But back to the women...What has this tradition have to do
with women participating in all the exploding fun?
Andreas Weidmann, spokesman for the Sechseläuten, said that the
invitation came in recognition of the association’s work at the market
and in promoting the role of women of historical importance.

He pointed to history to explain why women were still not allowed to
fully join the parade.

“At the beginning guilds were men’s associations made up of master
craftsmen and women were also involved... Later the guilds became
mainly the preserve of men – this is also the case in other areas of life,
there are also female-only associations – and this is a tradition which
is being kept alive in Zurich,” he told swissinfo.ch.

As for the question of continuing opposition to women taking part,
Weidmann pointed to the opinion process taking place in the guilds.
A final decision is expected in autumn, he said.