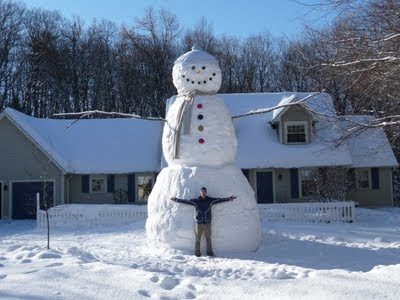 Okay, very exciting as we kick off this holiday season with a parade of snowmen submitted and piling up in our offices. The first entry for the January snowman contest is this 22-foot tall beauty from Muskoka, Ontario, Canada. Called Giant Snowman a.k.a. Frosty's Cousin the Titan created by Taylor, Cliff, Chris, Eric and Kevin who make a colossal snowman every year. Other entries will be popping up in the next couple of week's (on slow snowman news days). And there's plenty of time to enter if you wish–send entries to snowmanexpert@pipeline.com. Snowmen can be photos or artwork of snowmen–you don't have to actually make a snowman out of snow. 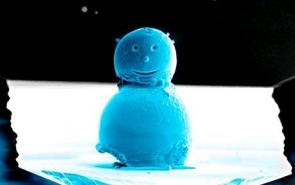 It's only fitting that we also report on the world's smallest snowman, too, which is about one-fifth the width of a human hair. Made by David Cox, a scientist in the Quantum Detection group at the National Physical Laboratory in the UK who is an expert in nano-fabrication techniques. The scientist created the snowman "by hand" using a system for manipulating nano-particles. Rather than being made out of snow, the figure's head and body consist of two tiny beads that are normally used to calibrate electron lenses welding the beads together with a tiny bit of platinum, and then used a focused ion beam to carve the eyes and smile. Lastly, he used an ion beam to deposit a tiny blob of platinum for the nose.

Finally, for fans of The History of the Snowman book, Bob Eckstein will be signing copies this Saturday (December 12th) at Winterfest in Hawley, Pennsylvania. If you're a New Yorker and looking for a signed copy, there are copies at Barnes & Noble in Union Square and at the Park Slope.

Next time (over the weekend); Snow women who know Tiger Woods.

Posted by Snowman Expert at 9:10 PM