It's National Burn A Snowman Day!

Somewhere in the US snowmen are burning...
and Welcoming Spring!
Snowman Burning Day was first celebrated in March of 1971 at
LSSU by the Unicorn Hunters. It was created to celebrate the
transition from winter to spring. 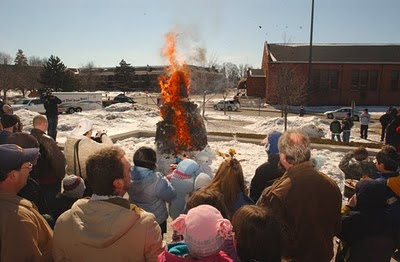 Snowmen are made out of wood, paper destined for the recycling bin, along
with some straw, wire and some paint. They are usually husky and
stand 10 to 12 feet tall.

The burning takes its inspiration from the Rose Sunday Festival in
Weinheim-an-der-Bergstrasse, Germany. In the festival, a parade passes
through town to a central location, where the mayor makes a proposal to
the town's children. If the children are good, study, obey their parents and
work hard, he will order the (straw) snowman to be burned, and spring will
officially arrive. After the children yell their approval and make their promise,
the snowman is burned.

Some people hold that rising smoke rising from the fire is supposed to ward
off blizzards and usher in spring-like weather. The Unicorn Hunters capitalized
on this theory during the second or third year of the event. At that time,
after the snowman was burned, a blizzard passed through the eastern
Upper Peninsula and northern Lower Peninsula but missed Sault Ste. Marie.

You can read more about this holiday (and see some historical pictures
and great videos!) at Lake Superior State University website:
http://www.lssu.edu/snowman/