It's a Snowman Portrait Gallery...of sorts 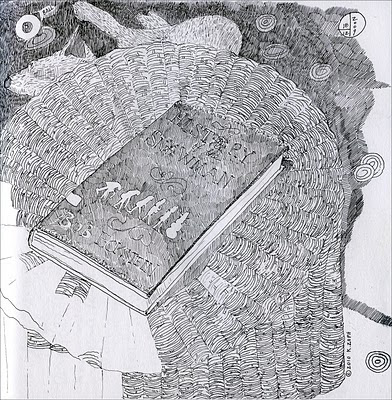 [Illustration © 2010 Kim Zoph]
While out "Googling ourselves" we came across this drawing of
our book by Kim Zoph, who is a fan of The History of the Snowman.
Kim is a professional artist specializing in portraiture and illustration,
and is a member of the Chicago Artist's Coalition.
She specializes in pen and graphite, but also works in watercolor,
colored pencil, or oil paint. You can see more of Kim's work (and even
commission her for a piece) at her website River Dog Portraits.

A Snowman in Texas... 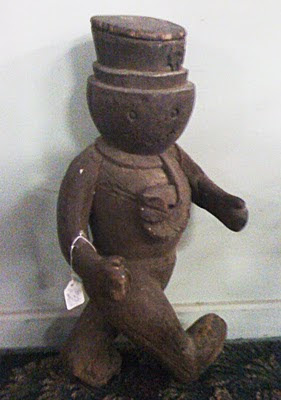 [photo by Mark Burdett © 2010]
Another piece of snowman artwork was sent to us our friend Mark who
had seen this piece in an antique shop in Lubbock, Texas. After doing some
research Mark said he believed that this was a wooden paper mache mold
from the thirties - which sounds really interesting to those of us that
enjoy old "quirky" things.

Some may say he doesn't look like a "traditional snowman" but we felt he
still had that "snowman quality' that would get him posted to this site
(and I want to know - where is he strolling to? or is he just crossing his legs?)

"Snowgiant" in Poland!
December 12th - As reported in The Straits Times a very large
(31 feet to be exact!) snowman was built recently:

A snowman reaching the height of 9.5m in Trzebnica, Poland. -- PHOTO: AP

WARSAW (Poland) - A GROUP of Poles have decided to make the
most of winter, building a 9.5m snowman dubbed Milocinek, who wears a
barrel for a hat and a road safety cone for his nose.

A Polish newspaper says several people laboured for six days on their creation,
which stands eye-level with surrounding two-story homes.

The website of the Gazeta Wyborcza newspaper says the snowman's creators
began their project out of boredom but became more ambitious as they went along.

The snowman was completed on Friday near the town of Trzebnica in
south-western Poland.

The newspaper's website reported on Saturday that the snowman's builders
believe Milocinek is the largest snowman built in Poland since winter weather
set in more than a week ago. -- AP

and back home, Smile and say "Cheese"
for the Dairy Love of Snowmen... 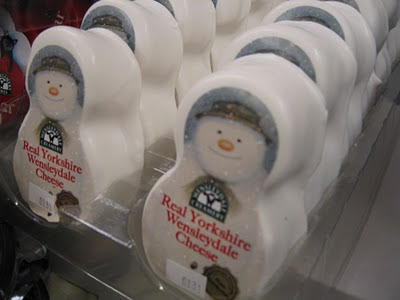 [photo by DH Tews © 2010]
Once again our camera toting friend DH happened across another type of portraiture...this one using the medium of cheese...well it may not be art...but at it's tasty (or so we've heard).