Yikes! a stolen snowman story and it's only December 3rd! 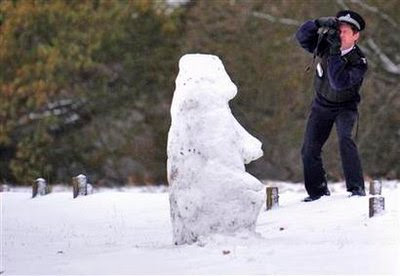 The caller said she had just looked outside her house and noticed that the snowman had gone. When asked if it was an ornamental snowman she said:
"No a snowman made of snow, I made him myself," adding that she'd
used money for the eyes.

Then she uttered the classic line, "It ain't a nice road but you don’t expect anybody to nick your snowman."
You can listen to here Woman calls 999 over stolen snowman (Video) as well as
replaying the story again & again on You Tube.

Yahoo News knows a good story (on a slow news day) and they also picked up this story that
you can view here.
Posted by Snowman Expert at 3:15 PM