High-Brow Snowman; The Series Part I Today's Snowman will begin today a 5-part series showcasing talented artists and writers in the snowman realm who happen to be friends and supporters of the only online snowman magazine.

David Giacalone is the creator of f/k/a, of "breathless punditry & one-breath poetry," an award-winning forum for "commentary on lawyers and legal ethics, politics, culture...and "real" haiku by...honored guest poets. David has not only mused over the subject of evolution in connection with the snowman, but even provides an interesting analysis of the results of February's snowman contest in conjunction with the presidential election (above is a picture of the runner-up, The University of Colorado snowman now hanging on to dear life); "It didn’t matter that the winner had in fact disappeared before election day. The Today’s Snowman worldwide Snowman Contest for February 2008 demonstrated once again the fundamental importance of having a big, wide base and then getting that base to the polls to vote." More on that here.

in the howling wind
under the full moon
the snowman, headless
– George Swede from Almost Unseen

naughty child–
instead of his chores
a snow Buddha
– Kobayashi Issa, translated by David G. Lanoue 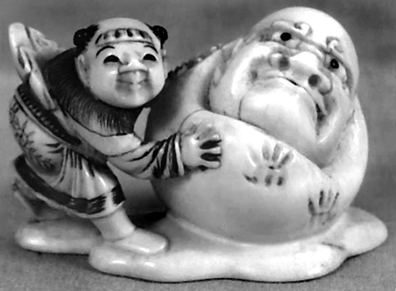 As readers of my book know, I continue to explore whether or not snowmen were made in 7th century Northern China as snow Buddhas based on evidence that both The Fengdao kejie and the I Ching (the oldest of the Chinese texts), provide their followers with guidelines for how holy images may be reproduced including “…shaped in piled-up snow…” (ca. AD 610 – 640). This topic is addressed more throughly in the snowman book.
Posted by Snowman Expert at 1:13 PM