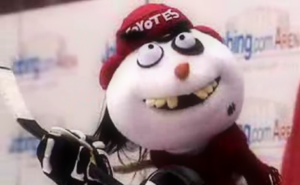 Pierre the Fanatic Hockey Snowman, the team mascot of the NHL's Phoenix Coyotes has been honored as the Best Member Club Marketing Campaign award for the 2008 season. The team's marketing efforts this season have revolved around the mullet-sporting, dentally challenged snowman looks like a crazed Muppet that got caught in a fight. He speaks with a French accent, and the hockey team has been running quirky 30-second television spots featuring its newest promotional figure. Runner-up was a Ranger fan who hadn't bathed in ten days.
Posted by Snowman Expert at 8:09 PM