What's So Funny About Peace, Love and Global Warming?

There's an "intermission" inside The History of the Snowman book, a chapter made up of some of the world's best snowman cartoons (I would say, in my book literally, definitively the best but even I have to admit that is subjective). One thing everyone would have to agree to is that the list of cartoonists in the book is astounding – over a dozen cartoons from New Yorker's top cartoonists, including Sam Gross, Danny Shanahan and Michael Maslin. Also the top two cartoonists in the world named Charles; Charles Schultz and Charles Addams (The Addams Family)...the late Jerry Marcus, creator of the famous Trudy...the creator of the popular and very funny Rubes, Leigh Rubin...my personal hero, the world famous cartoonist, John Callahan...and for good measure, '60s icon Robert Crumb and Paul Coker, Jr. of Mad magazine and creator of Frosty the Snowman. I befriended Paul when I gave him an oil painting I found on eBay. It was a portrait had he made in art school over 50 years ago. As thanks, he drew an original Frosty for my book.

(Why no Calvin & Hobbs? The artist is reclusive while other cartoonists (or their living family) were excited to be in the book. The publishers of C & H were only interested if no other cartoons would be in the book. Besides, I wanted the book to surprise. The C & H snowmen cartoons have saturated the internet and are a bit mainstream – the only reason to include them would be to be comprehensive. For the same reason a couple of excellent Family Circus cartoons were, unfortunately, edited out from the book.)

For a snowman cartoon from the book scroll down to The Snowman Cartoon Corner on this page. 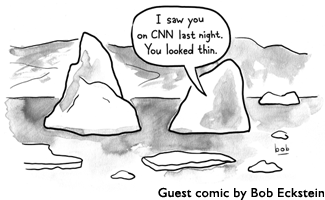 A cartoon which recently ran on Plentymag.com, a website for Plenty magazine.
Posted by Snowman Expert at 2:11 PM