Show Me the Snow! 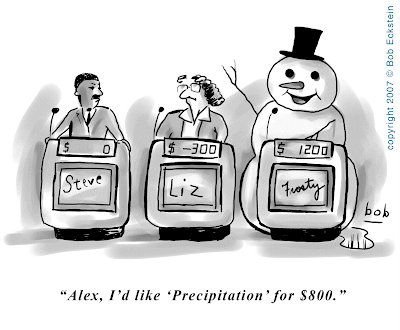 BURBANK STUDIOS, CA. – Some people are up in arms asking how could there be a snowman contest without any snow yet? True. And with the political climate and the holidays approaching, I've been accused of making everyone even more anxious for the white stuff to arrive.

No, I'm not suggesting you drive somewhere far with snow – and using gas unnecessarily. And no, I don't subscribe to fake snow – according to Plenty magazine, snow machines are tremendously wasteful to the environment. I know there's alot of skiers out there (and I love cross-country skiing myself) but I'm sure not many realize, for instance, that Vermont Killington Resort uses 720,000 gallons of water an hour to make snow during it's peak times.

Well, as I mentioned, snowmen come in all forms and we needn't wait for a storm nor resort to any snow resorts. Here's a snowman quilt from Karen From Georgia, who has a blog for primitive quilting (another old folk art which, like snowman making, dates back the 14th century).

I was actually going to build a snowman out of artificial snow for my upcoming book event. A Hollywood special effects company which specializes in fake snow was going to help with the pricing. In the end, it proved to be too expensive – a six-foot high snowman made indoors with fake snow runs around $3,000.
Posted by Snowman Expert at 7:17 PM